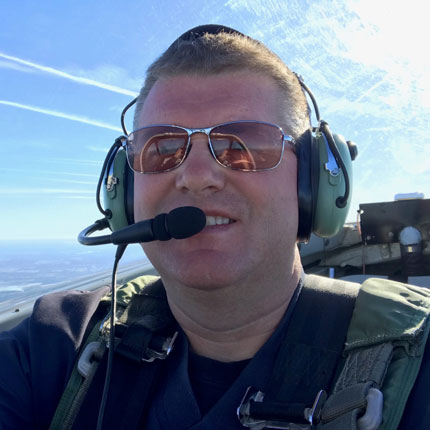 John Shuttleworth began flying at his father’s knee. First licensed in 1989, John embarked on a far-reaching career beginning with flying warbirds at airshows. By 1993 John had obtained Instrument, Commercial, and Multi-engine ratings, adding the ATP in 2017 and recently added a CE-650 type rating.

John holds a B.A. in Japanese from Bucknell University (1994) along with B.S., Mechanical Engineering Technology and A.S., Computer Integration Manufacturing Technology degrees from Purdue University. While at Purdue, John was an aerobatic instructor for the Aviation Technology school. From 1998 till 2017, John was employed in the automation industry providing conveyor systems and robot integration services, after which he launched a professional flying career.

Mr. Shuttleworth is currently a formation lead pilot and the B-17 Tour Pilot for the Liberty Foundation, and a Captain with Solutions Air Charter. He was President of the Wings of Freedom Museum and is a Director at EAA Warbirds of America.